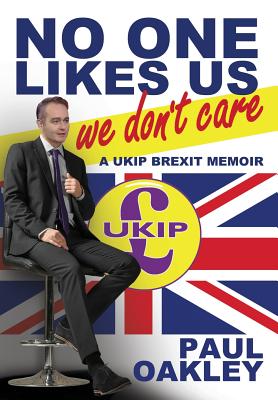 Former UKIP General Secretary Paul Oakley, worked at senior local then national levels during the rise and fall of the party. Paul has been a long-term campaigner for the UK’s departure from the EU, ripping up a copy of the Maastricht Treaty at a Young Conservative conference. Paul wrote the book “No One Likes Us, We Don’t Care: A UKIP Memoir” and we caught up with him to speak about this, politics and the state of Brexit.

Paul thanks for your time:

Most of your time in politics centred around one issue, the UK’s independence from the EU. What were your feelings the day we voted to leave, and what are your feelings on where we are now?

I expected the powers-that-be to try to frustrate Brexit and that is precisely what happened. Theresa May and her henchmen spent two-and-a-half years trying to derail the process. Then of course there was that dreadful Gina Miller who was effectively seeking the right for herself to cast the deciding vote on the referendum through the courts. Boris Johnson wasn’t much better, formalising a half-cock Brexit because he couldn’t be bothered putting any real effort in. As things stand now, the federalists are keen to blame all Britain’s economic woes on the decision to leave the EU. As far as they are concerned, the looming depression is nothing to do with its true causes, namely the insanity of the lockdowns and the idiocy of “net zero”. The push for regional and global governance looks set to continue and it might yet be necessary for us to retrieve our claymores from the roof thatch once again.

Now we are at least partially out of the EU, what do you think we should do with our restored sovereign powers?

Vested interests will try to stop us doing very much at all. Prime Minister Truss and Chancellor Kwarteng had the excellent idea of lifting the EU-imposed cap on bankers’ bonuses. That would have resulted in financiers rushing away from the EU to work in the City of London with an associated boost in tax receipts for the Treasury (for those who think that sort of thing is important). Unfortunately, the Sunak coup put an end to that. On the positive side, it seems that the Tory government are considering withdrawing from the European Convention on Human Rights. It was not possible for us to do this while an EU member state. This must be replaced with an updated British Bill of Rights for British citizens. It’s absurd that aliens currently enjoy the same fundamental rights as nationals. Perhaps that sensible idea will be allowed to fizzle out too however.

UKIP made a bag of cats look like a calm reasoned environment. What was it that made UKIP so ungovernable?

This was our strength. Question everything; accept nothing. Brexit would not have happened without that attitude, no matter how annoying it may sometimes have proved for the course of party governance.

You’ve written a book about your time in UKIP. What made you write the book, and what has the reception been like?

I wrote it as I went along while keeping contemporaneous notes because I thought it was worth recording this modern peasants’ revolt from the ground level. Those who have read it seem to have enjoyed it. Unfortunately, it was published at the time of the unexpected 2019 EU elections which meant that it received zero media interest because of electoral law. Never mind. I now plan to write the Great Romantic Novel which will doubtless have a better reception.

Three similar things. At the time of the 2014 EU elections, the Electoral Commission allowed counterfeit UKIP parties to stand calling themselves “UKEPP” and “UK Independence Now”. That cost us two MEPs and was precisely the kind of deceit that the Electoral Commission had been set up to tackle. Then there was the 2015 general election when the SNP polled 1.4 million votes and won 56 seats yet UKIP, with 3.8 million votes, returned only a single MP. Finally, there was Nigel Farage’s campaign in Thanet South during that same election. There has still been no real explanation as to why ballot boxes went missing for several hours on the night of the count and it still seems odd that UKIP won control of the council yet Farage did not win the constituency. Nonetheless, the media has assured us that there was no evidence of electoral fraud so that’s alright then.

Taking all these together, it is plain that the establishment and the system itself were united in stopping UKIP from achieving the heights it deserved. That makes our victory in the 2016 referendum even more impressive. We should be proud of ourselves.

We’ve had lockdowns, have restrictions on free speech, tech giants operating seemingly with impunity, rising fuel costs, identity politics and have a PM not selected by either his party or the country. If Brexit was the panoptic battle of the last 30 years, what’s the battle for the next 30 years?

Recent events have shown that the battle remains the same: to resist all authorities which seek to control the United Kingdom without democratic oversight. That will involve resigning from the 1951 Refugee Convention and 1967 Protocol; leaving the World Health Organisation and, indeed, the UN itself. We also need to give real thought to the question of whether the UK should remain in NATO. Save for funding the military industrial complex, it’s hard to understand why NATO did not disband after the collapse of the Soviet Union. For so long as Erdogan’s Turkey remains a member, the concept of collective defence under Article 5 of the Washington Treaty is a worry, not a reassurance. Further, it is not in the interests of the British people at all to be dragged into any future conflict with Russia and China in order to assist new or prospective NATO members.

Paul’s book “No One Likes Us, We Don’t Care: A UKIP Memoir” is available from Amazon at https://www.amazon.co.uk/No-One-Likes-Dont-Care-ebook/dp/B07PPV5HBC/